7 Best One Piece Games to Play on PC & Laptop

The popularity of the One Piece manga has finally spawned various adaptations in the form of TV series, films, and games on various platforms. 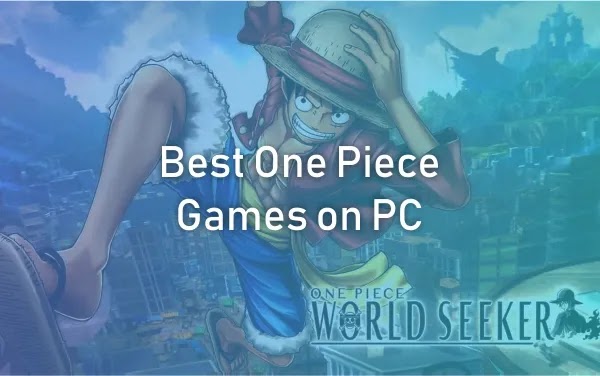 Games From Most Popular Anime

Which anime lover doesn't know about the One Piece franchise? Even those who don't like anime have at least heard the name One Piece as a child – One Piece is one of the Sunday morning cartoons that many children have been waiting for.

One Piece originally is a manga/comic which was first launched in 199Eichiro Oda in Japan. Since the appearance of the first chapter entitled "Romance Dawn", we can witness the adventures of a small boy named Luffy who dreams of becoming a pirate king.

The popularity of the One Piece manga has finally spawned various adaptations in the form of TV series, films, and games on various platforms. This time, Inactiontech will provide a list of One Piece games that can be played on PC. 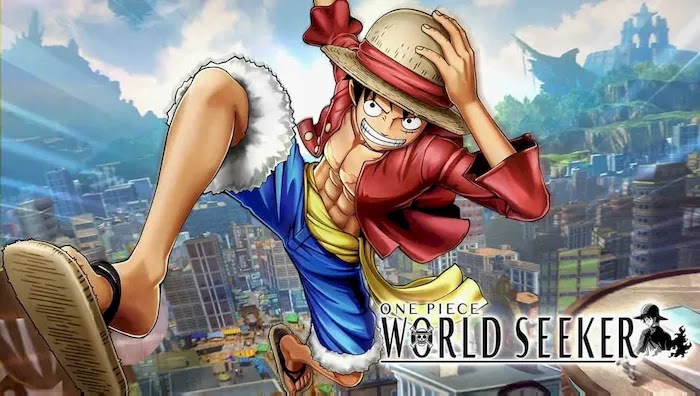 The One Piece game, released in March 2019, is an offline open-world adventure genre game. You will play Luffy to explore a very large area and fight against various popular characters such as Smoke and Lucci. Uniquely in this game, you can use Luffy's elongated hand moves to explore the area quickly, much like Spider-Man.

There will be lots of side-quests and main-quests that you can complete on Jail Island, an island in New World that is the original setting – this island, along with its new story and characters, has never appeared in any other One Piece adaptation.

In terms of combat elements, this game brings many new mechanisms compared to previous games. For example, you can freely change the usual mode with other modes such as second gear and haki. There is a stealth element, too, so you can try to subdue your opponent from behind secretly.

The atmosphere in this game also looks good with stunning scenery details. You can buy One Piece: World Seeker on Steam for Rp. 550.000- at this link. 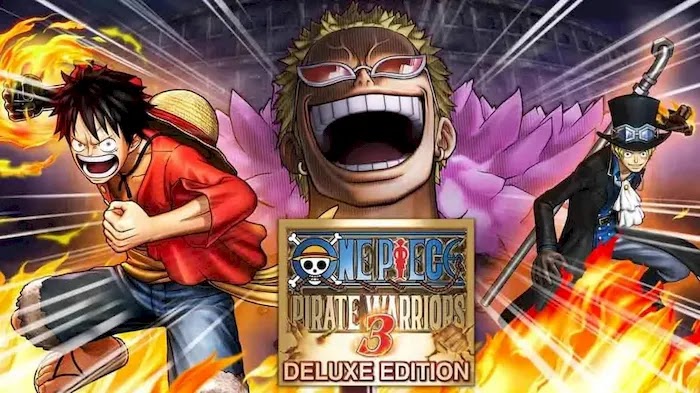 In this action-packed game, you can play a variety of characters from the One Piece manga and anime. This action game results from a collaboration between BANDAI and the developer of the Dynasty Warriors series, KOEI TECMO.

The most fun thing about this game is that you can feel your own satisfaction when the characters you play can kill hundreds or even thousands of enemies in a fast time. The battle mechanism, a  hack-and-slash, also presents various iconic moves, just like the moves that each character has in the anime.

Oh yes, this game is also suitable for those of you who have never even watched One Piece at all. You see,  the story setting that is taken follows the anime plot from the beginning to the last arc when the game was released, namely Dressrosa.

You will be invited to reminisce watching Luffy recruit his first crew member, Zoro. The best moments from One Piece were also present, such as fighting Gecko Moria, adventures on Sky Island, and most importantly: "Battle of Marineford."

This game is the third in the series – the first and second Pirate Wars are not available on PC. There are several additional features in terms of gameplay, for example like Kizuna Rush, which allows other characters to help when you're issuing moves.

Then, you can also watch in-game cutscenes that will only appear if you succeed in carrying out certain commands (killing enemies under the specified time, etc.).

There are 37 playable characters, as well as 5  chapters consisting of 25 stages in total. You are guaranteed to play this game for a long time. You can buy One Piece: Pirate Warriors 3 for IDR 450,000 at this link. 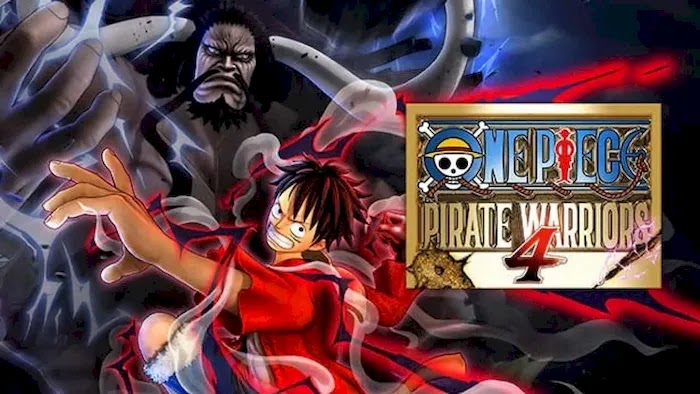 The sequel to  Pirate Warriors 3 has also been released, namely Pirate Warriors 4, with an even better battle mechanism and story. Still carrying the hack-and-slash mechanism, you can feel the satisfaction of destroying many enemies in one attack.

When compared to the previous series, Pirate Warriors 4 has a different approach in terms of story. The plot no longer starts from the beginning of the story in the anime, but only a few iconic arcs. When you first play, you will play a  tutorial stage on Wano Island as Luffy, accompanied by Eustass Kid.

When this stage is successfully passed, you will immediately be taken to explore the Kingdom of Alubasta to stop Crocodile from his evil mission. Although it doesn't contain all the arcs like Pirate Warriors 3, you can enjoy a more focused and immersive storytelling approach.

Oh, and one more thing, for the first time in history, you can follow the storyline against Big Mom and Kaido in the One Piece game. There are also some changes in terms of combat, namely the absence of Kizuna Rush. Instead, several special moves can be issued by pressing two buttons simultaneously, much like Dynasty Warriors 9.

In this game, you can also jump and perform various moves in the air. This jumping mechanism can be combined with skill combos on the ground, creating a series of more dynamic and deadly attacks. This game also presents various fourth gear variants for Luffy's characters, such as Bounce-Man and Snake-Man.

Unfortunately, some interesting arcs are not available such as Sky Island and Thriller Bark. You also can't play as Gecko Moria and Enel – but maybe these two characters will be presented through DLC (Downloadable Content). 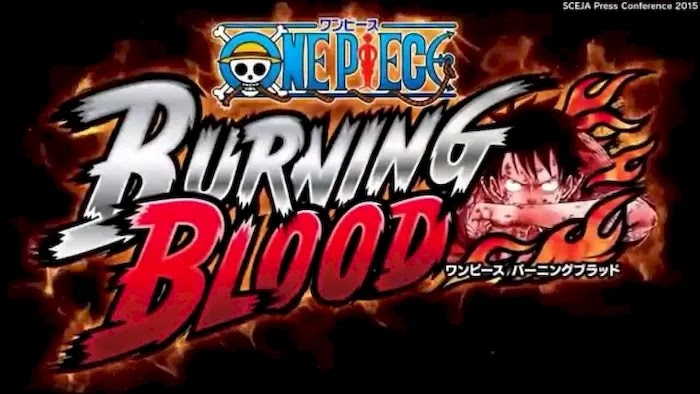 Have you ever played One Piece: Grand Battle on PS1? If so, maybe you will like this one game. One Piece: Burning Blood is a fighting genre game with a unique perspective. In general, fighting games have a  perspective from the side, and this game has an over-the-shoulder view  (from behind).

This game only adapts the story during the great war at Marineford. You will play four characters with different perspectives such as Luffy, Edward Newgate (Whitebeard), Akainu, and Ace. Indeed, if you only focus on the story mode, this game can be finished in a short time.

However, the reason this game is so worthy of being loved is the fighting mechanism. You can play 3 on 3 with a duel battle format. You can also take advantage of the advantages of each type of devil fruit, such as Logia, which has a strong defense, or Zoan, which can transform in real-time. Oh yes, you can play online too,  you know!

Best of all, you can play  Luffy's fourth gear version – along with several other character transformations such as Franky, Chopper, and Drake. Interested in trying it? The game, which was released in 2016, can be obtained through Steam for Rp. 600,000 - at this link. 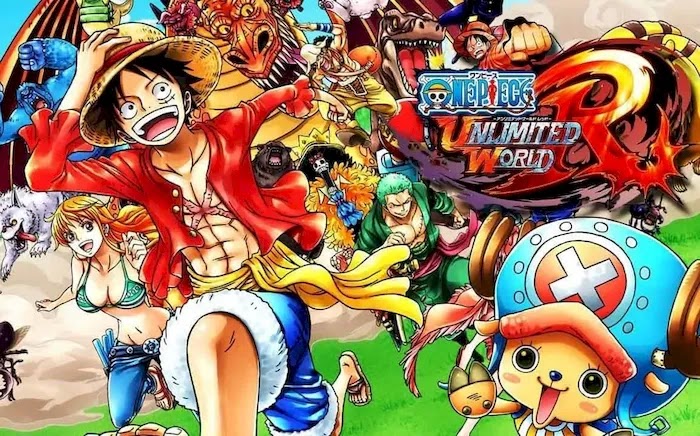 This One Piece game was originally released for Nintendo 3DS in 2014 before finally making a PC version in 2017 with the title One Piece: Unlimited World Red Deluxe. Adventure and action game genre, you will play as Luffy to explore an island and use combo moves to fight enemies.

At first glance, it's similar to One Piece: World Seeker. You can move from building to building by extending your arms. There are 9 playable characters, and each has its own uniqueness.

For example, because Brook is a skeleton, he can walk on water and access areas that other characters can't reach. Likewise, with Nami can pickpocket her enemies, Chopper can restore the HP of other characters, and so on.

Although it carries a different origin story from the anime, it also features various popular enemy characters such as Smoke, Akainu, Kizaru, and many more. If you're interested, you can buy this game on Steam for IDR 310,000- here. 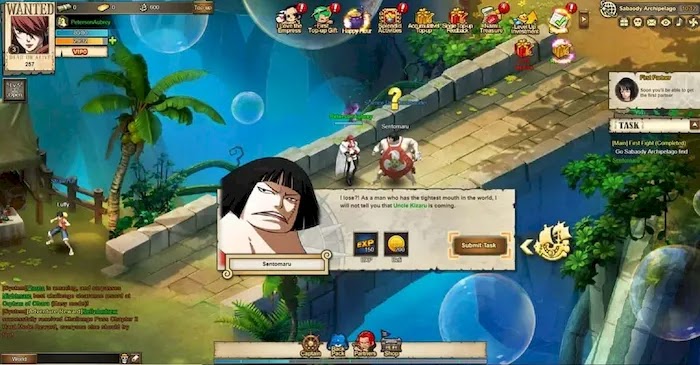 In addition to the official games available on Steam, One Piece games can be played via a browser only. One of them is One Piece Online, an MMORPG game that can be played using Flash in the browser.

This game has a class system like most MMORPGs in general, with three options: Swordman, Sniper, and Devil Fruit User. The battle mechanism in One Piece Online is point-and-click, where you can give orders to attack by clicking on the enemy.

When Shanks wants to discuss Kaido's plans to attack Whitebeard, he leaves you a message to convey to Luffy. After that, you will fight against Sentomaru, who is after Luffy.

The quality of the story may not be as good as the other games on this list. This is reasonable considering that One Piece Online from JoyGames is unofficial and made without supervision from Eichiro Oda. But, for the size of a browser game that can be played for free, the quest mechanism and leveling up in this game is still worth enjoying. Click this link to play it.

You will play a character created by yourself with 4 choices of classes: Sailor, Dark Mage, Sniper, and Doctor, with various advantages.

This game carries a turn-based mechanism with exciting animations and also authentic moves that each character has. The first time you play, you will act as Shanks against Mihawk. The fight ended in a draw, and then Shanks said that he wanted to find someone who inherited the "Will of D."

Your role here is as a pirate whom Shanks recruited to explore the oceans and conquer other pirates. Who knows, maybe you can become the next pirate king after Gol D. Roger. To play it, visit this link.

Those were some One Piece games that can be played on PC. Although there are only a few, all the games above are more than enough to make you feel like you are in the real One Piece universe. If you've never bought a game on Steam before, it's a good idea to read an article on how to buy games on Steam easily. Congratulations on being a pirate!