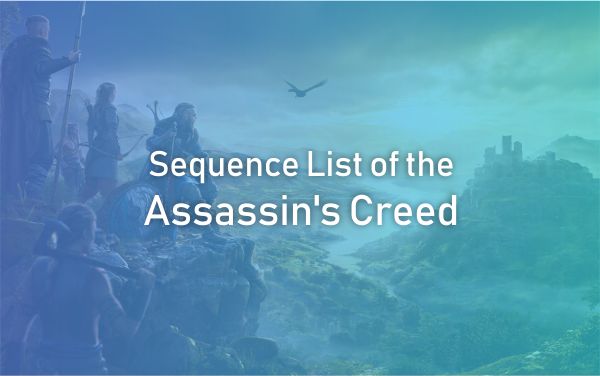 The Assassin's Creed franchise has become a popular game that millions of people worldwide have played. This game presents a game-style action, adventure, and stealth with an open world concept that can be explored. To date, this franchise has produced more than 20 units of titles available on all types of video game platforms.

In addition to bringing the feel of a game full of fighting action, this game also features some historical, scientific, and cultural context packaged through an interesting and fun storyline to follow. Although it has many titles, Assassin's Creed actually has 12 main series games connected.

Well, for those who want to know the titles of the eleven games, We will provide a full review below. Without further ado, here is the discussion for you. 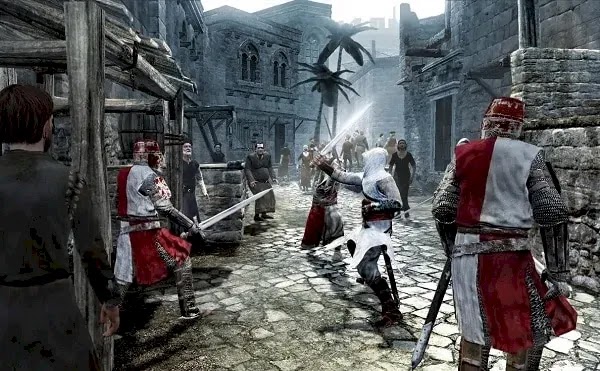 The storyline in the first Assassin's Creed game takes place during the Third Crusade in Jerusalem. It focuses on the conflict between the Secret Order of Assassins from the Hashshashin sect and the Knights Templar. Players will take on the role of Desmond Miles, who lives in modern times. He is a descendant of his ancestor, who was an Assassin named Altaïr Ibn-La'Ahad.

The scientists then used Project Animus to extract Altair's memory from within Desmond Miles. Scientists then learned about the movements of the Assassins, and Miles began to adapt to the memories of his ancestors.

In Desmond Miles' memory, players will then battle against the Knights Templar for the Piece of Eden. It is an ancient artefact that can be used to control the human mind. 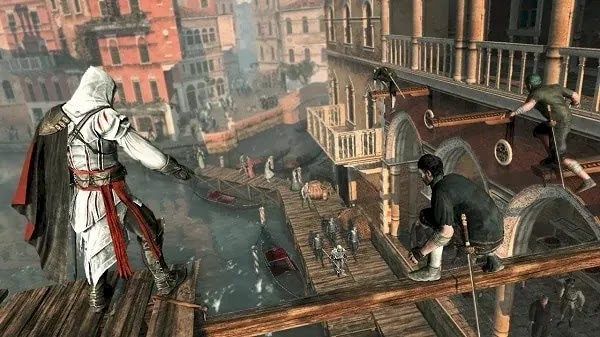 This time Desmond Miles revived the memory of one of his ancestors, who was still an Assassin named Ezio Auditore da Firenze. The setting of the story then is in the 16th century during the Renaissance era. The players can then explore the beauty of the cities in Italy while completing missions of revenge against those who have betrayed the Ezio family.

In addition, players will later try to solve the mystery left by an ancient race called First Civilization so that the conflict between the Assassins and Templars will end soon. Throughout the game, players can use several NPCs, such as mercenaries, comfort women or thieves, to use as reinforcements in completing some missions. 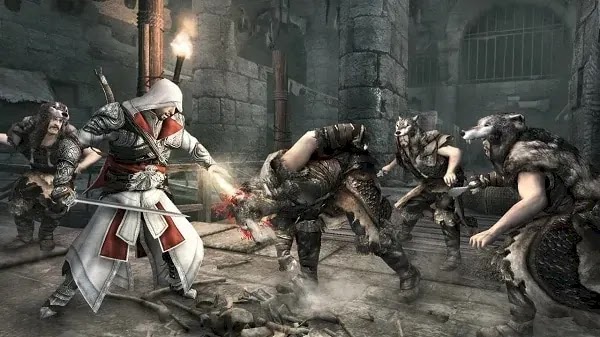 This game presents Ezio Auditore da Firenze again as a character that players can play. Still, in the Renaissance period of the 16th century, players will have missions that focus on restoring order to the Assassin group and destroying the Borgia family.

Like in the previous two games, the game is set in an open world through gameplay from a third-person perspective. Players can freely explore the City of Rome to complete side missions as well as the main mission. The game also introduces a multiplayer component that can be played as a Templar troop training program mode. 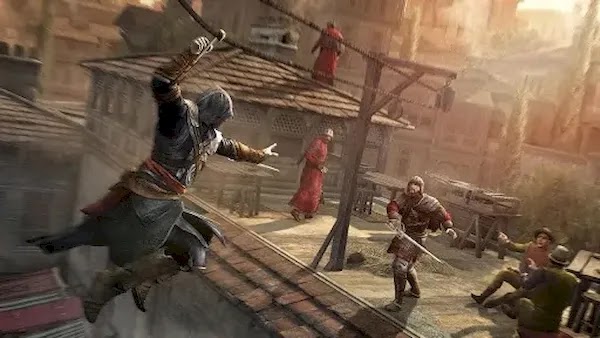 Players will also be presented with stunning views of 16th century Constantinople and the exotic Masyaf region in the Middle East. In addition, players must reclaim cities that the Templars have captured. Players must defend it because the Templars will later send more reinforcements to take the city. 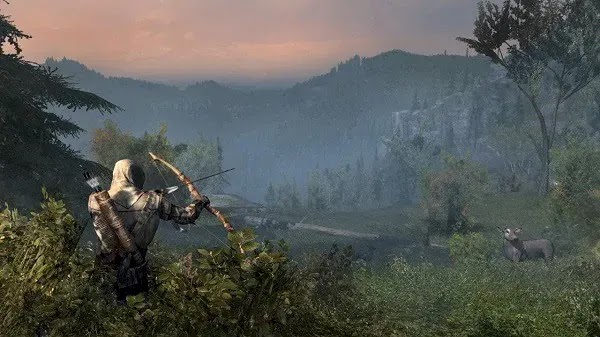 The American Revolutionary War will be the background of this game's story, and players will take on the role of a Ratonhnhake named Connor. His father was a leader of the Templar Order in the Colony, while his mother was of Indian origin. Connor will clash with the Order of the Templars led by his father, who intends to dominate the newly formed America.

Wild nature such as forests and mountains will be the game environment often encountered in this game. Players can freely explore the place through parkour actions, such as running on cliffs, mountains, climbing trees, and others. In addition, players can use various weapons, ranging from bows, ropes, hidden blades, swords and pistols. 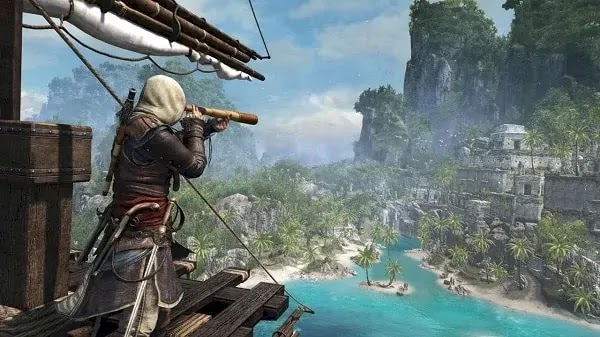 The main character of this game is a soldier who became a pirate in the Caribbean Sea named Edward Kenway. He is the grandfather of Connor, who is one of the main characters in the game Assassin's Creed II. After killing an assassin named Duncan Walpole, Edward then took his identity and joined the Brotherhood of Assassins. 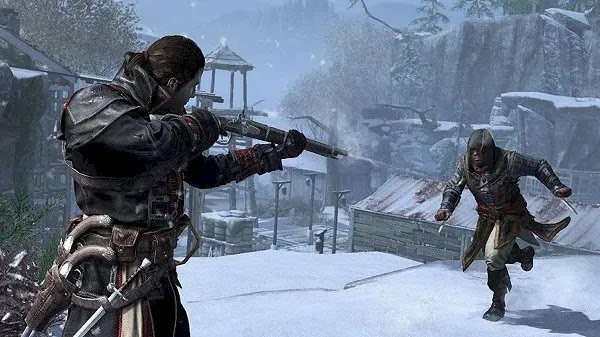 Set in the 18th century during the Seven Years' War, players will control an Assassin named Shay Patrick, who defected to become a Templar soldier on a mission to hunt down the Assassins who betrayed him. The gameplay in this game combines ship-based ocean exploration and land exploration through melee and distance combat.

Players can control the ship The Morrigan as a vehicle or a tool of war in the ocean area. Players can release oil spills into the ocean, which can then be ignited into flames to repel enemies. In addition, players can use air rifles to kill enemies from a distance while on land stealthily. 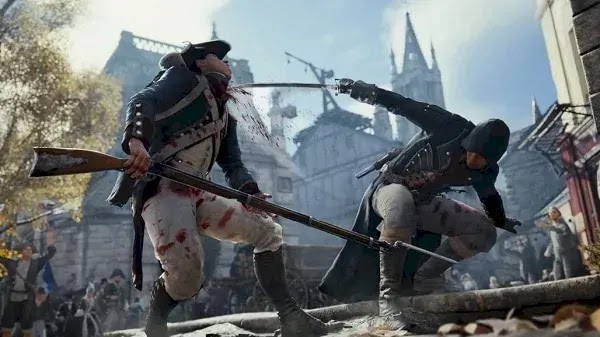 Here, players will take on the role of a Frenchman named Arno Dorian. Shay Patrick killed his biological father at the end of the game Assassin's Creed Rogue. A new family then adopted him, and his adoptive father held the position of Grand Master in the Templars. When his adoptive father is murdered, he intends to unravel the root of the problem by going to the Assassins.

Unlike previous games, this series features similar features such as a skill tree used to increase stealth skills, melee and ranged combat, and raising health levels. Players also have a wider choice of weapons, including swords, axes, spears, rifles, pistols, and explosive items such as smoke bombs and others. 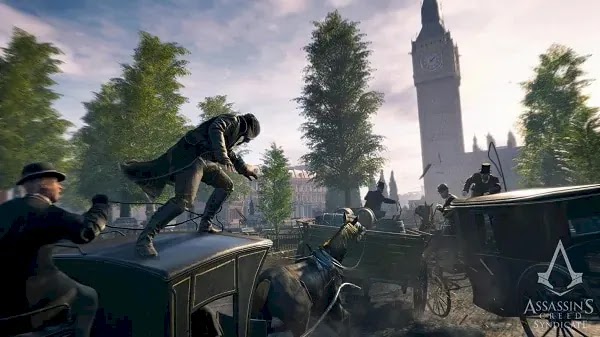 In this game, players can control two characters named Jacob and Evie Frye. Both are Assassins who have different characters and fighting abilities. Jacob is a strong fighter when it comes to close combat. On the other hand, Evie was calmer because she relied on her intelligence and was good at hiding techniques.

Evie is the first playable female character in the main Assassin's Creed series. Players will be equipped with weapons such as brass knuckles, revolvers, swords, and kukri knives throughout the game. Players will have a mission to take over the city of London, which the Templar troops have controlled during the reign of Queen Victoria in Great Britain. 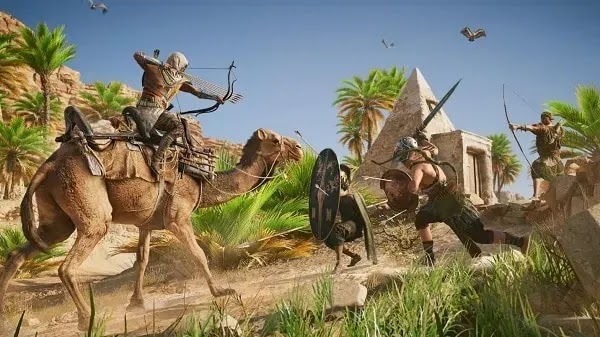 In Assassin's Creed Origins, players assume the role of a warrior named Bayek. He aims to take revenge on a mysterious group called The Order, who killed his son. The group turned out to be a precursor to the Order of the Templars, and its members wear masks and have undisclosed identities.

Through the journey of Bayek, players can find out and trace the origins of the conflict that occurred for centuries between the Brotherhood of Assassins and the Templar Order. The Assassins wanted to fight for peace through free means, while the Templars wanted to do this through the coercion of order. 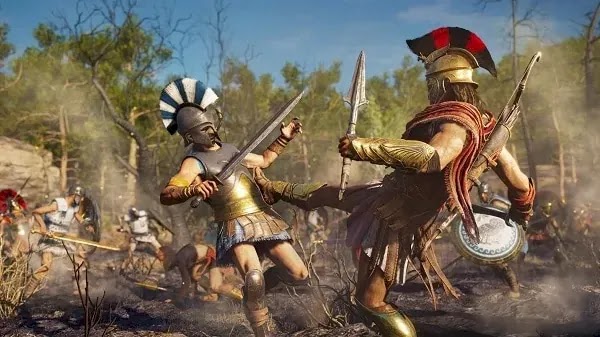 In the age of Ancient Greek civilization, players can control the brothers Alexios and Kassandra. Both were mercenaries from respectable Spartan families. As a result of an incident, their family has torn apart, and both disappeared and were declared dead in an accident.

They are still alive and growing as mercenaries on a foreign island. Whoever the chosen character will be, the player has a goal and a mission to unite the families of Alexios and Kassandra. 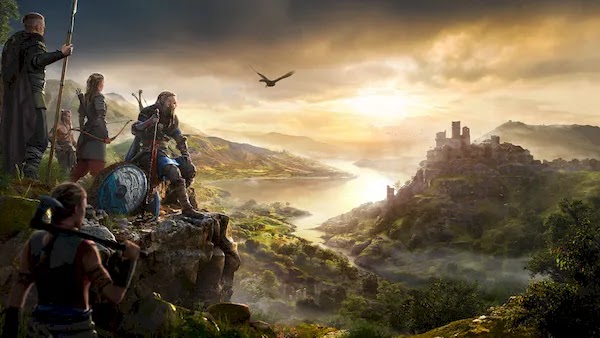 Revamping all aspects of the Origins series and perfected in the Odyssey series, Assassin's Creed is now back to greet its fans in its newest series, Valhalla. Lifting Vikings and Norse mythology as the main theme.

Valhalla will take you to follow the story of Eivor, a boy from the Vikings. The story began in Norway when Eivor was a child when the Vikings of the Raven clan were partying while drinking. Then, suddenly they received a sudden attack from a rival clan that killed both of Eivor's parents. Eivor, who survived the incident, holds a grudge and wants to avenge his parents' deaths.

After successful revenge, Eivor and his friend Sigurd invite his friends to go to England, searching for a new life. Eivor, who was appointed as the leader, was responsible for expanding his colony.

The Assassin's Creed game can be said to be one of the pioneers in carrying the concept of an open world-themed game. Through this approach, you as players will be invited to explore freely on a wide game map. Well, for those who want to finish the main Assassin's Creed series one by one, you can try the list of choices above.